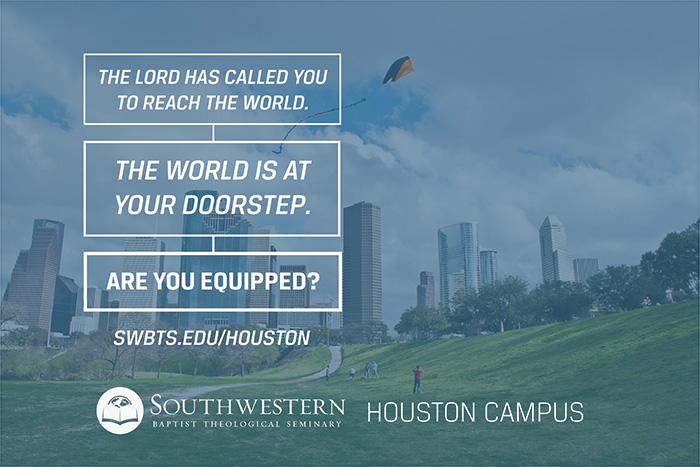 As Southwestern Seminary President Paige Patterson pointed out, relatively few preachers have the courage to preach from Ezekiel 40-48. These chapters, which detail the 1,000-year reign of Christ after the Great Tribulation, are often misunderstood, and students instructed to preach through entire books of the Bible often point to this section of Ezekiel as evidence that such a method is not always possible.

Addressing students and faculty of the Havard School for Theological Studies in Houston during their spring convocation, Feb. 1, Patterson not only demonstrated how to preach such passages but also delivered a message of encouragement from the text. Specifically, he preached Ezekiel 47:1-12, which speaks of the river flowing from the temple in Jerusalem whose waters multiply as they flow into the sea. On the banks of the river are trees whose leaves are said to bring healing. Despite all the pleasant details, however, verse 11 indicates that the “swamps and marshes will not be healed; they will be given over to salt.”

“A lot of people think that the Millennium is heaven on earth,” Patterson said. “No, it isn’t. It’s the closest thing to heaven that anybody will ever experience on this earth, but it is not the new heavens and the new earth in which dwelleth righteousness and where there will be no salt marshes that are not healed. Even during the Millennium, there are traces of the waste of the earth due to the sin of Adam.”

“The first conclusion you must draw from this is that you cannot resolve every difficulty you face in the ministry,” Patterson continued. “You may think you can; that’s the danger of being young. But then the agony of being old is that you’ve seen more situations you can’t do anything about than ones you can do something about.”

Patterson related an experience in which he counseled a man at the request of the man’s wife. The man had been to “every psychiatrist in town,” but none had been able to “cure” him. After three months of biblical counseling with Patterson, however, the man became a thriving member of the family of God.

When the man’s wife inquired as to what Patterson had done, he replied, “I would like to tell you I did it, but I’m just not that big of a liar. What I can tell you is that God graciously intervened, and the unbelievable took place.”

“And that leads me to my second lesson for you,” Patterson continued to the Havard students. “My second lesson is not only can you not solve many a problem, but if, in your ministry, there is not the presence of the power of God, you will definitely fail.”

Patterson proceeded to explain that, while he wants students to learn as much as they can during their time at the seminary, he desires most of all for them to understand that, with men, the changing of lives is impossible, but with God, all things are possible. He noted that, just as Ezekiel, who received his prophetic revelation in the midst of Babylonian exile, wrote of the trees on the banks of the river whose leaves bring healing to the nations, so students should go forth into the world in the power of the Spirit with a message of healing—the Gospel.

“What a work to be called into,” Patterson said. “Just think: you could build massive football stadiums, you could build tall skyscrapers, you could do all this kind of stuff, and it wouldn’t amount to a hill of beans in the end; it will all be destroyed. But instead, God has called you into the work of taking care of the trees whose leaves are for the healing of the nations.

“You have a message that alone can bring about the healing of the nations. Never forget that your calling is the highest and noblest of all.”

Aside from Patterson’s sermon, the convocation service also featured special music by the Pearland High School Kantorei Choir under the direction of the school’s head choral director, Derrick Bready. In addition, newly elected faculty member Charles Savelle was introduced. He will serve as assistant professor of Bible exposition.