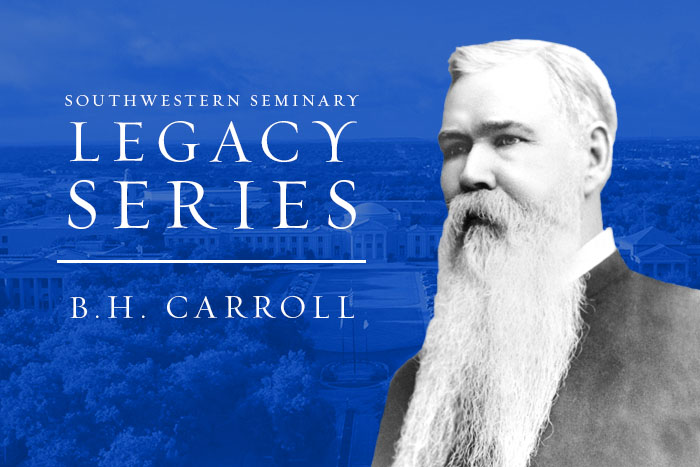 Editor’s Note: This is the first in an ongoing series examining the impact of key individuals from the history of Southwestern Baptist Theological Seminary.

Traveling by rail through the Texas Panhandle, B.H. Carroll looked across the plains and saw a vision of the Baptist situation in the Southwest. He saw multitudes of preachers with limited education; consecrated men hungering for better training in the work to which God called them and to which they had dedicated their lives. He saw many institutions in the Southwest for the training of teachers, lawyers, doctors, and farmers, but not a single institution dedicated to the training of Baptist preachers. “It weighed upon my soul like the earth on the shoulders of Atlas,” he later wrote.

Carroll seemed to hear God question, “Whom shall I send, and who will go for me?” Carroll was ready to give Isaiah’s answer: “Here am I; send me.”

“But at once there arose before me what seemed insuperable obstacles,” Carroll writes.

He began to think of the many struggling institutions of other important and necessary lines of Baptist work, and “the heavy burdens that these institutions had placed upon the shoulders of our pioneer people.” He thought, as well, of his advanced age and declining health, supposing that he could “hardly hope to live long enough to consummate such a gigantic enterprise,” let alone serve as its leader. It occurred to him, also, that much of his life had been given to promoting denominational enterprises and that he had hoped to give his last years to “the quiet, unmolested companionship of my books.”

Carroll was thus ready to dismiss the matter, feeling that he could not do it.

“[But] there came to me as clearly as if audibly spoken the assuring word of our Lord: ‘I am He that liveth, and was dead, and behold, I am alive for evermore,’” Carroll writes. “With this trumpet-tongued call and assurance of divine help resounding in every part of my being, I wrestled with the problem until at last I was irresistibly driven to say, ‘Lord, it is clearly thy will; what is impossible with man is possible with God; go thou with me and I will try.’”

When Carroll came to himself there on the train, he realized he had stood and tightly gripped the seat before him. Other passengers stared at him in amusement, unaware of the monumental occasion they had just witnessed. Carroll returned to his seat, embarrassed.

“But from that hour I knew as definitely as I ever knew anything, that God would plant a great school here in the Southwest for the training of our young Baptist preachers,” he writes.

That school would be the Southwestern Baptist Theological Seminary, founded in 1908 and located since 1910 in Fort Worth, Texas. This train-ride vision, occurring in the spring of 1905, would lead to the equipping of more than 46,000 God-called men and women to touch the world and impact eternity over the course of the next century and beyond. And it was to the founding of this great institution that the 61-year-old Carroll would devote the rest of his life.

A Life of Service

Benajah Harvey Carroll was born in 1843 in Carrollton, Miss. By his own admission, he remained a spiritual “infidel” for much of his early life, but finally came to know the Lord through a revival meeting at age 21. He quickly became a zealous and powerful preacher of the Word of God, and devoted his life to Christian service.

Carroll pastored multiple churches, spending 28 years as pastor of the First Baptist Church of Waco; he was instrumental in the formation of the Baptist General Convention of Texas (BGCT) and in the consolidation of the two Texas Baptist colleges into Baylor University; he was a leading voice when controversies arose within the Southern Baptist Convention; he served as a trustee of both Baylor University and Southern Baptist Theological Seminary in Kentucky; and he served as a professor and then dean of the Bible Department at Baylor. He was also involved in numerous fundraising endeavors for Baptist causes.

By 1905, after a life of service, Carroll was in declining health and nearly deaf. Perhaps understandably, he looked forward to retirement. But after receiving his train-ride vision from the Lord, he realized that his greatest work remained to be done: founding a school for the training of Gospel ministers in the Southwest.

“It started with no endowment and with no prospect of any,” says L.R. Scarborough, Carroll’s assistant and later successor as president of Southwestern Seminary. “No convention and no denominational board guaranteed its support; no wealthy patron financially guaranteed its life. It had no habitat.

“It had the guarantees only that were mixed in the faith and in the heart of one giant preacher, and in the hearts of his loyal supporters, whose number was not large at that time. His faith challenged the resources of God and lashed the program and future development of the seminary to God.”

Despite the arduousness of the task, or perhaps because of it, Carroll wasted no time in seeking to fulfill his vision. Before returning from his journey, he had already begun efforts to raise $30,000, which he felt would provide for salaries and expenses of a seminary staff for three years. He made a list of 100 friends, then wrote each of them a personal letter asking for $100 a year as an emergency fund for the proposed seminary. By the end of that summer, he had pledges and cash in the amount of $22,000.

Carroll strategically worked with Baylor’s board of trustees in order to launch the school, and it initially emerged in the fall of 1905 as Baylor Theological Seminary in Waco. Carroll and Baylor’s leadership later agreed, however, that the seminary should exist as a distinct institution from the university. The school thus emerged as Southwestern Baptist Theological Seminary on March 14, 1908, when it was formally chartered. Carroll was named the seminary’s president.

In its first semester, Southwestern Seminary matriculated 190 ministerial students, together with laymen and women preparing for special Christian service, for a total enrollment of 215. They had come from four foreign countries and 11 states and territories.

As president, Carroll’s primary responsibilities were helping to sustain the ministerial students in the school and soliciting funds to keep the school in operation. In addition to teaching at the school, lecturing across multiple states, and overseeing the faculty, Carroll thus devoted great efforts to writing individual appeals.

Even after suffering a severe fall in the summer of 1908 that left him confined to his room, Carroll did not remain idle, but constantly wrote letters seeking funds to finance the seminary.

In one such letter to a Texas pastor, Carroll wrote, “I am up a tree. Can you and your fine men help me?” The pastor replied, “I’m in a hole. How can a man in a hole help a man up a tree?” Carroll answered, “When you come up the tree to help me down, you will be out of your hole.”

Beyond founding the institution itself, seeking to provide for its continuing operation, and assembling the faculty, one of Carroll’s most significant contributions to Southwestern Seminary was his establishment of a chair of evangelism, which he called “the Chair of Fire.”

“There is great need to create and endow a chair of evangelism,” he said in a 1906 report to the Southern Baptist Convention. “Revivals are not only the hope of a lost world but the hope of the churches. If a seminary have not the mind of the Lord, it is none of His. If the Spirit of the Lord do not indwell it, it is a vacant house.”

“The mind and spirit of Jesus appear in His life,” he continued. “His school of the prophets was intensely practical. The wisdom He inculcated was the winning of souls.”

The Chair of Fire at Southwestern Seminary, established in 1908, was the first chair of evangelism at any seminary in North America. Its first occupant and later namesake was L.R. Scarborough.

“Many times [Carroll] appealed to me to accept the position in the Seminary in a way that swept my soul,” Scarborough recalled. “What I owe to B.H. Carroll in compassion for lost men as he interpreted the embodiment and compassion of Christ for lost men I can never tell. He made Christ’s love for men real to me and to all those to whom he preached.”

By 1909, Carroll and Southwestern Seminary’s board of trustees agreed that the institution should move to its own location (rather than remain part of Baylor University’s campus in Waco). The infant seminary ultimately moved to Fort Worth, Texas, in 1910. But though the seminary now had its own home, its location was remote and not easily accessible, and its first building, Fort Worth Hall, would not be finished for several years.

Carroll was burdened by the plight of his students and faculty in having to operate in a still-under-construction building, but he commended them for bucking up under adverse circumstances. “Well, we plead no baby act and play no whining role,” he wrote of the school’s first semester in Fort Worth. “We have camped out before.”

Throughout the seminary’s early years, Carroll’s health worsened. Beginning in the fall 1911 semester, Carroll could lecture only once a week. The remaining lectures he dictated to a stenographer in his bedroom; these were then reproduced by mimeograph and distributed to his students. His ongoing attempts to secure funds were similarly weakened.

At Carroll’s request, Scarborough was appointed assistant to the president in 1913, essentially making him acting president and spokesman for the seminary. Carroll gradually became less involved with the day-to-day operations of the seminary and was essentially bedridden. In November 1914, roughly a month before his 71st birthday, Carroll fell into a coma for several days. He died on Nov. 11.

“He was at the genesis of the institution,” said Scarborough days after Carroll’s death. “He saw it in vision. He planned it, nurtured it, formed its ideals, set its standards, projected its endowment, and contributed most largely to its spirit. It was born in his loving heart, and has grown up to its present strength feeding on his heart’s blood. It is his dearest spiritual offspring. It is the crowning work of his last years.”

Carroll had envisioned a great school in the Southwest for the training of young Baptist preachers. Within three years, that vision had become a reality. What was impossible with man was possible with God, and by faith, Carroll founded the seminary. He not only saw his vision fulfilled, but he led the seminary through its earliest days. More than 110 years later, more than 46,000 men and women have been trained for Gospel service because of how he spent his final years.

“We believe God has led us thus far that He may lead us on,” Scarborough said. “We trust in God, and go forward to the task left us by our honored leader … and will do our best to build it along the lines laid out by him, under the direction of the Spirit of God.”