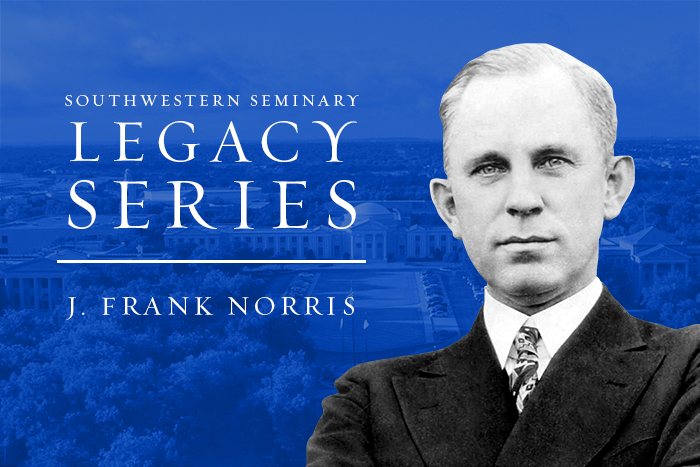 History has forgotten the primary and pivotal role John Franklyn Norris (1877-1952) played in the establishing of the Southwestern Baptist Theological Seminary in its home on a hill in south Fort Worth in 1910. Norris, pastor of the First Baptist Church of Fort Worth (1909-1952), was a legendary leader in his day, and his church became the largest church in America. At the dedication of First Baptist’s new auditorium 10 years into his pastorate in 1919, The Fort Worth Record reported, “Total attendance for the day was more than twelve thousand, with at least two thousand turned away, and 200 converts were added to the church.”

Norris’ legacy is a strange mixture of both fact and fiction. His perplexing personality seemed to live a life of perpetual paradox. If ever a man lived up to his nickname, “The Texas Tornado,” it was Norris. He was one of the most colorful and controversial figures in Texas history. From both his pen and his pulpit, he would often swoop down out of a dark cloud, strike with dastardly force, and leave in his wake the ruins of lives and even legacies. While most 20th-century Baptist historians have revered the likes of L.R. Scarborough and George W. Truett, they have likewise reviled the legacy of J. Frank Norris. But there is “the rest of the story” that begs to be recorded for posterity.

In the beginning, Norris was the consummate denominational loyalist. Tutored by the legendary B.H. Carroll at Baylor University, he was an honors graduate at the university and valedictorian of the Southern Baptist Theological Seminary’s class of 1905. Upon graduation from seminary, he moved to Dallas, where he eventually became owner/publisher/editor of The Baptist Standard while still in his 20s. This position afforded young Norris a visible platform to promote the work of Baptists throughout the state of Texas and catapulted him into denominational prominence.

Meanwhile, down in Waco at Baylor, Carroll had dreams of expanding the university’s Bible department into a full-fledged seminary and moving it to the rapidly growing Dallas-Fort Worth area. Although Truett would later serve for years as a Southwestern Seminary trustee and board chair and would be memorialized by having the campus auditorium named in his honor, he originally tried to form a coalition, consisting of A.J. Barton, J.B. Gambrell, and S.P. Brooks, among others, to oppose and prevent Carroll’s dream from coming to fruition.

According to historian H. Leon McBeth, Carroll “encountered massive opposition” from this Truett-led coalition of respected Texas Baptists. Even though he opposed the move, by the sheer power of his personality, Truett had been appointed chair of the committee to find a new site for the fledging institution. In hopes of dampening the spirit of the move, he recommended two small lots in the Oak Cliff section of Dallas, which infuriated Carroll.

In a letter dated March 30, 1909, Carroll let Truett know in no uncertain terms that he considered this recommendation an insult, and he did not intend the new seminary to be “A TWO BY FOUR INSTITUTION.”

Norris seized the moment. He loved Carroll and had revered him since his days at Baylor. Norris began a series of weekly articles on the front page of The Baptist Standard promoting Carroll and the move of the seminary to a site made available by the city fathers of Fort Worth on a hill south of town.

Those opposing the seminary move became irate with Norris for his advocacy and what they considered to be an unbalanced approach in the weekly tabloid. Truett convened a gathering of the directors of the Standard to remove Norris as editor. Norris was not only editor, however, but the majority stockholder, so he, at the same time, convened a meeting of the stockholders and subsequently dismissed all the directors. Many point to this incident as the beginning of an open hostility between Truett and Norris that would ensue for decades.

Norris’ campaign caught on and won the hearts and minds of Texas Baptists. Thus, at the annual state convention meeting at Truett’s own First Baptist Church of Dallas in 1909, it was young Norris—not Truett—standing beside the tall and stately Carroll on the platform making the appeal for the move of the seminary to Fort Worth. As historian Robert A. Baker would later recount, Norris invoked in unbroken eloquence, “Not since Peter preached at Pentecost and baptized three thousand converts has there been anything more glorious than the founding, endowing and locating of Southwestern Baptist Theological Seminary.”

Thus, what was destined one day to become the largest seminary in all the world found its new home on a hill in Fort Worth, and in no small part because of the efforts and influence of a young J. Frank Norris.

A few months later, upon the recommendation of Carroll, Norris was called to be the pastor of the First Baptist Church of Fort Worth. Once there in his new church, Norris set out to raise the money to undergird the seminary and to build its first building.

The Fort Worth Star-Telegram reported that Norris was in Fort Worth “to meet members of the church and to confer with the committee which is soliciting subscriptions for the Baptist Theological Seminary.” Two days later, the same paper reported, “At the First Baptist Church Dr. J. Frank Norris . . . preached a strong sermon, presenting to his congregation the great benefit that the proposed big seminary would confer, not only on the church, but on the city and humanity and Christianity in general. He presented a strong case for the seminary and its location here, and his words fell on willing ears.”

Norris helped raise the $100,000 needed to bring the seminary from Waco to Fort Worth. And, in fact, “Norris pledged to raise half that amount from the church, and he did.” He did not stop there. He was the driving force behind raising the $200,000 needed to build the fledging seminary’s first building, named Fort Worth Hall in honor of its new hometown, and led the congregants of First Baptist Church to give half of that amount as well.

Norris served faithfully and loyally as a founding trustee of Southwestern Seminary until after the death of Carroll. Ironically, after Carroll’s death, the seminary and her new leader, L.R. Scarborough, would find themselves in the middle of the bullseye of some of Norris’ most vocal and vitriolic attacks, beginning with the encroachment of the theory of evolution within Christian institutions of higher learning in the 1920s.

In early 1921, J.A. Rice, a professor at Southern Methodist University, began promoting a pro-Darwinian approach to creation. This led Norris on a war path. He was joined by Scarborough, and, together, their challenges and campaign led to Rice’s resignation.

Soon thereafter, Baylor professor Grove Samuel Dow published a book entitled Introduction to Sociology. Within its pages, he blatantly argued in favor of the naturalistic evolutionary process. Norris launched an assault on this heretical teaching at the bastion of Baptist education, resulting in the firing of Dow and eight other professors. Norris wrongly assumed that Scarborough would join him in this fight, as he did with the one at SMU over the same issue. To his utter amazement, Scarborough and Truett remained silent and responded, “We don’t want to have any stir up about this. . . . You will ruin the 75 Million Campaign.”[1] This perceived hypocrisy in valuing denominational loyalty over doctrinal fidelity added to the growing divide between Norris and the leaders of the Southern Baptist Convention in Norris’ mind.

Some observers think that a deeper part of Norris’ growing conflict with Scarborough and Southwestern Seminary was that Norris had hoped, even expected, to be the handpicked successor to his mentor, Carroll. He saw himself as the true recipient of the charge Carroll gave to Scarborough to “keep the seminary lashed to the cross.” He sharply disapproved of many of the changes Scarborough made after the death of Carroll, particularly in moving away from the English Bible course that Carroll had implemented and to which he was intensely committed. Interestingly, when Norris later founded his own seminary, the Bible Baptist Seminary, he reduplicated almost exactly the English Bible course of B.H. Carroll.

As the later decades of his life unfolded, Norris’ mean-spirited nature began to increasingly reveal itself. He would often send telegrams to Truett in the midnight- and early-morning hours on Sunday to awaken him from his sleep before he was to preach the morning message. He resorted to sending the professors at Southwestern Seminary beautifully wrapped Christmas presents that were placed on their front porches, only for them to find that the boxes were filled with all types of rotten fruits.

As one conflict and controversy led to another, Norris drew his own circle smaller and smaller until he had shut out much of what could have been his wider influence and lasting legacy. In the end, however, he sought to make amends to those with whom he did battle. The Scarborough Archives at Southwestern Seminary contain loving letters Norris sent Scarborough as the former seminary president lay dying in his daughter’s home in West Texas.

Raymond Barber, a student at Norris’ seminary during the late 1940s and early 1950s, tells the story of taking Norris on a trip one particular morning. As it was, Barber had one of the only automobiles among the seminary students in those days. On a given morning and at an appointed time, Norris asked the young seminarian to pick him up at his office and take him on a brief journey. Barber, accompanied by his brother, Bob, picked the pastor up, and they noted as he stepped into the back seat that he had a beautiful bouquet of flowers in his hand. Rather abruptly, he then said, “Drive me out west of town.”

They drove west of the city until they came to a cemetery. Norris instructed the boys to stay in the car. He walked out across the endless tombstones until he went over a small hill and could not be seen. After a half-hour, he returned to the car, instructing Barber to take him back to his office and for the two of them to hurry back to seminary classes. Barber revealed that upon dropping the pastor at the church office, they headed straight back to the cemetery. They journeyed across the hundreds of tombstones until they spotted the bouquet of flowers Norris had brought. They found them on the grave of Lee Rutland Scarborough.

Southwestern Seminary grew from its birth to become the largest seminary in the world, sending multiplied thousands of her graduates to the international mission fields, as well as pulpits of churches and teaching lecterns in colleges and seminaries too numerous to mention. Among J. Frank Norris’ many accomplishments, none have had more lasting Kingdom value and impact than his tireless, bold, and strategic efforts in the establishing of the Southwestern Baptist Theological Seminary in Fort Worth, Texas.

[1] The 75 Million Campaign was a national effort by Southern Baptists to raise $75 million over a five-year period for missions and ministry. Both Truett and Scarborough were national campaign leaders.